I have Progyny health insurance through my company. They cover the majority of my fertility costs, as long as I use in-network providers. I initially chose Boston IVF because SART reported that they had serviced many patients. In retrospect, there were a few red flags about […]

The panic from my initial diagnosis of fertility issues died down within a week. My fertility took the backseat to my new job, my new fiancé, and life in a new city. It wasn’t until a full year later that I thought about it again. […]

Journal Entry #1: How I Came to Learn About My Infertility (August 2015)

I was 22 and new all-around. Newly graduated. Newly engaged. Newly employed. My new job had flown me out to San Francisco for orientation. After a week-long orientation, I found myself at the airport, waiting for my flight back home. I decided to pass the time by calling my grandmother. Of course, we talked about my new job and new fiancé (that fiancé eventually became my husband, pseudo-named Mr. Oven). I offhandedly mentioned that Mr. Oven had sickle cell trait.

“Don’t you have that too?” My grandmother asked.

The day of the appointment went smooth. I mentioned a bit of pain I sometimes felt near my right ovary. Three years ago, a cyst bursted on my right ovary, resulting in intense pain. Ever since then, I had felt occasional pain, perhaps once a month, with an intensity ranking 4 out of 10. My doctor recommended I get an ultrasound the same day.

A week later, as I was riding the bus from work to go home, I got a phone call from my gynecologist.

I’ve always been a very perceptive person. I could tell from how she said those innocuous words that she had bad news. Before she even said it, I began to panic. I had sickle cell trait. Furthermore, they found a few things on the ultrasound. Adenomyosis. Fluid in my fallopian tube. Signs of endometriosis.

“You’ll probably be able to have kids, but it’s going to be hard.”

It was at that point, I started to cry.

My doctor’s condolences only made me cry more. I thought to myself, How fucked is my situation that my doctor, who has probably seen people die, feel sorry for me? I knew my doctor wasn’t the type that dealt with giving bad news well and was finding our conversation particularly painful. I ended the conversation as soon as was possible, for her sake and maybe mine. As soon as we said our “goodbyes”, I proceeded to cry uncontrollably on the bus. Prior to me ending the call, I had noticed a few wandering ears listening in. Now, it seemed that half the bus stared at me as I proceeded to be that crazy woman on a bus sobbing. A woman in her 40s, who had been listening the entire time pulled a tissue out of her purse. “I’m so sorry.”

I got off at the next stop, even though it wasn’t my stop. 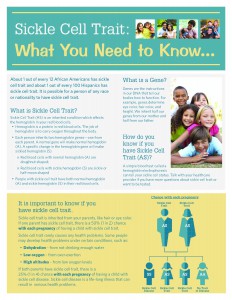 I needed a target for my anger and the natural target was my mother. Mr. Oven’s mother had told him that he sickle cell trait his entire life and to be wary

of marrying someone with it.

Why hadn’t my mother been as responsible? When I called her and informed her she had sickle trait, it was a strange conversation. My mother is not well-versed in biology or health. Her specialty is more writing and math. So, when I told her that I had sickle cell trait, her first question was “How?” She insisted that because my three half-sisters didn’t have it, that I

must have gotten it from my father. She treated the situation as if I was accusing her of giving me an STD and insisted it wasn’t because of her. She also insisted she had no idea.

That day, Mr. Oven was out with his brother, celebrating his brother’s birthday. I spent the day, alone, crying. Until I eventually called my best friend and told her.

Four days later, my mother called me and told me about a card the doctor had given her when I was born (she still had it). The card was green and said “Your child has sickle trait, here’s what you need to know.” The card went on to explain that having sickle cell trait didn’t matter at all… unless you married someone who also had sickle cell trait.